The daughter of Archbishop Desmond Tutu, REV. NONTOMBI NAOMI TUTU blends her passion for human dignity with humor and personal stories. Her professional experience ranges from being a development consultant in West Africa, to being program coordinator for programs on Race and Gender and Gender-based Violence in Education at the African Gender Institute at the University of Cape Town. She served as Program Coordinator for the historic Race Relations Institute at Fisk University, and was a part of the Institute’s delegation to the World Conference Against Racism in Durban. She the recipient of four honorary doctorates from universities and colleges in the US and Nigeria. Rev. Tutu is an ordained clergy in the Episcopal Diocese of Tennessee. She serves as a curate at Christ Church Cathedral in Nashville and has recently been hired by the Cathedral of All Souls in Biltmore Village to work on racial and economic reconciliation issues across Western North Carolina. 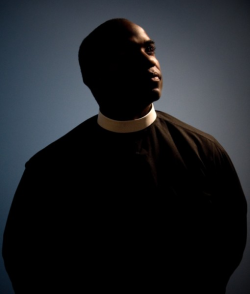 THE VERY REV. MICHAEL BATTLE, PH.D., Currently appointed as Herbert Thompson Professor of Church and Society and Director of the Desmond Tutu Center at General Theological Seminary in New York. In 2010, Battle was given one of the highest Anglican Church distinctions as “Six Preacher,” by the Archbishop of Canterbury, Rowan Williams. A distinction given to only a few who demonstrate great dedication to the church that goes back to 16th century England and Thomas Cranmer. Battle has published nine books, including Heaven on Earth: God’s Call to Community in the Book of Revelation, Reconciliation: the Ubuntu Theology of Desmond Tutu, and the book for the Episcopal Church’s General Convention, Ubuntu: I in You and You in Me. In his PeaceBattle Institute he works on subjects of diversity, spirituality, prayer, race and reconciliation. Almost since its inception, he has served as pastor and spiritual director to hundreds of clergy and laity for CREDO for the Episcopal Church. He has also served as chaplain to Archbishop Tutu, Congressman John Lewis, the House of Bishops and, in 2008, was chaplain to the Lambeth Conference of Anglican Bishops. He is a featured keynote speaker and has led numerous clergy and lay retreats, including the bishops’ retreat of the Province of the West Indies. For more about his extensive clergy experience and impressive academic resume go to:  michaelbattle.com

French Anthropologist René Girard provides renewed self-esteem to Christians by showing how Jesus explodes the sacrificial, violent nature of human community. Jesus explodes the mechanism in human beings that requires another victim. Girard brilliantly articulates how human beings are entirely dependent on the re-establishment of order after cycles of victimary bloodletting. (Battle, Heaven on Earth, 43) 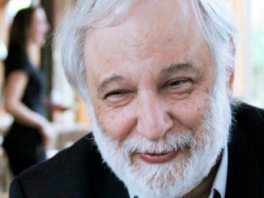 SANDOR GOODHART, PH.D.,  ‘Sandy’ is a Professor of English and Jewish Studies at Purdue University’s Department of English. He served as the Director of the Jewish Studies Program (1997-2002), of the Philosophy and Literature Program (2005), and of the Classical Studies Program (2007-2011). He is the author of five books on literature, philosophy, and Jewish Studies including Möbian Nights: Reading Literature and Darkness (Bloomsbury Academic, 2017), The Prophetic Law: Essays in Judaism, Girardianism, Literary Studies, and the Ethical (East Lansing, MI: Michigan State University Press, 2014), Sacrifice, Scripture, and Substitution (Notre Dame University Press, 2011; co-edited with Ann Astell), For René Girard: Essays in Friendship and Truth (East Lansing MI: Michigan State University Press, 2009), Reading Stephen Sondheim (Garland: New York, 2000), and Sacrificing Commentary: Reading the End of Literature (Johns Hopkins University Press, 1996). He served as guest editor for a special issue of Shofar, 26.4 (Summer 2008) on Emmanuel Levinas, the co-editor (with Monica Osborne) of a special issue of Modern Fiction Studies, 54.1 (Spring 2008) on Emmanuel Levinas, and the editor of a special issue of Religion, An International Journal 37.1 (March 2007) on René Girard.

He is a founding board member of the North American Levinas Society (founded with his students at Purdue), the former President of the Colloquium on Violence and Religion (2004-2007), and the author of over ninety essays (including essays on Bernard Malamud, Philip Roth, and Saul Bellow).

Sandy will lead us through a Midrash on the Hebrew Bible and Beloved Community.

THE REV. JANET WOLF, Director of Children’s Defense Fund (CDF) Haley Farm and Nonviolent Organizing. CDF is a national organization led by Marian Wright Edelman that works toward justice for children impacted by the cradle-to-prison pipeline.  Janet coordinates SALT: Schools for Alternative Learning and Transformation, a participatory educational community inside Riverbend Maximum Security Institution in Nashville, Tennessee. As Director of Public Policy and Community Outreach with Religious Leaders for a More Just and Compassionate Drug Policy, she worked with a national interfaith coalition on harm reduction, alternatives to incarceration and restorative justice. She is the author of Practicing Resurrection: The Gospel of Mark and Radical Discipleship, and “To See and To Be Seen,” a chapter in  I Was in Prison: United Methodist Perspectives on Prison Ministry. For 12 years she also served as a community organizer around poverty rights. She previously served as faculty chair and professor at American Baptist College in Nashville, a historically Black college and home to many of the national civil rights leaders. For the United Methodist Church, the Rev. Wolf served as pastor of rural and urban congregations for 12 years.

The link below features Rev. Wolf on a panel with Michelle Alexander, Bryan Stevenson, Ndume Olatushani (who was sentenced to death and served 30 years for something he did not do), and our T&P president, Preston Shipp. 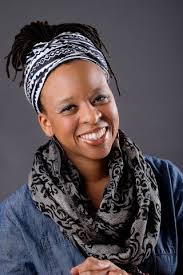 MICKY SCOTTBEY JONES is a perpetual learner, “justice doula”, consultant, facilitator, mama/sister/friend, nonviolence practitioner and contemplative activist living just south of Nashville, TN. After 10 plus years as a mother-baby specialist, trainer and author, she decided to shift back to earlier interests: theology and community development. She is a member of the co-learning community of NAIITS (North American Institute of Indigenous Theological Studies) and graduated with a Masters of Arts in Intercultural Studies.

Her early career included the cutthroat world of Contemporary Christian music, youth programming and community development through the YMCA and Rocketown (Nashville). Her special interests & scholarship include womanist & practical theology, the intersections of Black and Native American history and theology, the pursuit of shalom, faith-rooted organizing, intersectional justice, community formation, wholeness and  healing.

Now engaging groups through academic gatherings, conferences, blogs and podcasts on a wide variety of topics, Micky facilitates conferences, trainings and online conversations while exploring a variety of topics including self-care in community, healing justice, intersectionality, faith-rooted activism, revolutionary friendship, race & justice, and theology from the margins. She loves to curate contemplative and dialogic spaces and activities. Named one of the Black Christian leaders changing the world in Huffington Post, Micky is the Director of Healing Justice at Faith Matters Network. She is currently serving as an Associate Fellow for Racial Justice with Evangelicals for Social Action an activist-in-residence at Scarritt Bennett Center in Nashville, TN. She consults with a variety of people, projects and organizations as opportunities arise.

Micky believes in traveling the world while spreading revolutionary love, engaging in authentic conversations, and participating in transformative experiences – and mosti importantly – she never passes up a dance floor. 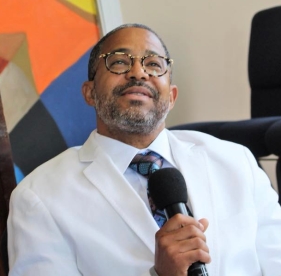 RAHIM BUFORD was paroled in 2015 after being locked up for 26 consecutive calendar years. While in prison, he acquired certifications from numerous educational institutions and became a leader in SALT (Schools for Alternative Learning and Transformation). He received a four-year scholarship to American Baptist College, where he’s currently pursuing a degree in behavioral studies.  He is the founder of Unheard Voice Outreach (UVO) and a member of the ICAN (Incarcerated Children’s Advocacy Network), which is an initiative of the Campaign for the Fair Sentencing of Youth. Both UVO and ICAN are profound experiments in Beloved Community. He a regular volunteer and mentor to children incarcerated at juvenile detention centers, facilitating classes and workshops which implement the SALT program he first experienced as a student in prison.  His book, Save Your Own Life is intended to help young people who are at risk in the cradle-to-prison pipeline, those who are currently in the justice system, and formerly incarcerated individuals who are re-entering society.  He is manager of the Nashville Community Bail Fund, which provides financial support to individuals who cannot afford to post bail.

Rahim spoke at the 2018 Theology & Peace Conference, “Accepting the Invitation to Beloved Community,” when he shared his heartbreaking and transformative story. 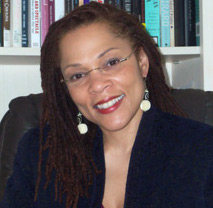 Her  first book, Race, Religion, and the Pulpit: Robert L. Bradby and the Making of Urban Detroit (2015), explores how Bradby’s church became the catalyst for economic empowerment, community-building, and the formation of an urban African American working class in Detroit. Her second book project, 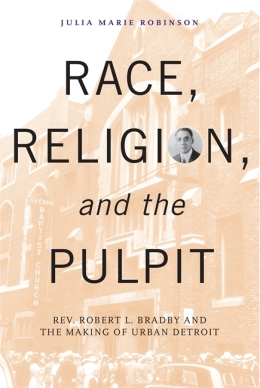 Overcoming Race in the Faith: Historical Perspectives in Healing the Divide Between Black and White Presbyterians speaks to the complexities of black and white race relations in America through the sacred context of the Presbyterian Church. This second work offers a history of race relations within American Presbyterianism with an eye towards healing the racial divide with the larger Presbyterian Church. Her third book project is titled, Rituals of Race and Resistance: The Modern Civil Rights Movement Through the Lens of Mimetic Theory, 1960-1968. This third project seeks to situate race as a category of analysis within mimetic theory through the study of violence and non-violence in the Modern Civil Rights Movement during the 1960s.

For her faculty profile go to: http://clas-pages.uncc.edu/julia-marie-robinson/ 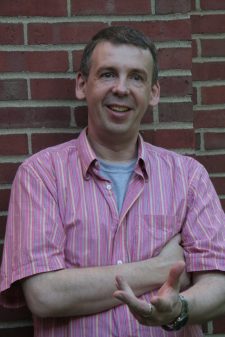 JAMES ALISON is a Catholic theologian, priest and author, James has studied, lived and worked in Mexico, Brazil, Bolivia, Chile, Spain and the United States as well as his native England. James earned his doctorate in theology from the Jesuit Faculty in Belo Horizonte, Brazil in 1994 and is a systematic theologian by training.

His principal claim to fame is as one of those who has done most to bring the work of the great French thinker René Girard to a wider public. In addition he is known for his firm but patient insistence on truthfulness in matters gay as an ordinary part of basic Christianity, and for his pastoral outreach in the same sphere.

James was brought up in an Evangelical Anglican family, and became a Catholic at the age of 18 in 1978. He was ordained priest in 1988. Having lived with the Dominican Order between 1981 and 1995, James now works as an itinerant preacher, lecturer and retreat giver. He is currently a Fellow of Imitatio (www.imitatio.org). He accompanies a wide variety of publics, through academic lectures, undergraduate, postgraduate and professors’ seminars, adult catechesis courses, retreats for priests, parish groups, and Catholic and ecumenical gay and lesbian retreats.

James’ most recent work (2013) is Jesus the Forgiving Victim a program of induction into the Christian Faith for adults, available in DVD, text or digital formats, and which follows on from the insight into desire associated with René Girard. (www.forgivingvictim.com) The text has been fully translated into French and Welsh. In addition a Spanish translation is in progress.

When not on the road, James lives in Madrid, Spain. Read more about James at: http://jamesalison.co.uk

MORE SPEAKERS TO BE ANNOUNCED!