Hochschild’s “Strangers in Their Own Land,” Trumpism, and Mimetic Theory, Part 1 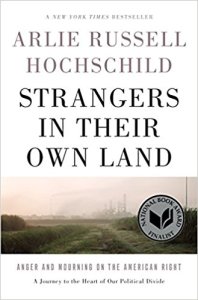 Today’s events, with the seemingly constant assault on facts and truth, calls into question an account of human beings as rational. In reviewing Arlie Russell Hochschild’s book Strangers in Their Own Land: Anger and Mourning on the American Right, I anticipated offering Mimetic Theory — with its focus on mimetic desire, not reason — in support of de-emphasizing the popular view of Homo sapiens as a rational animal.

So I googled “quotes about human beings as rational animals,” expecting to find a nice quote from someone like Aristotle in support of human reasoning prowess. No such quote appeared. None. Instead, I found quotes only critical of the notion. Here’s a sampling:

I wonder who it was defined man as a rational animal. It was the most premature definition ever given. Man is many things, but he is not rational. ―Oscar Wilde, Playwright

Man is a rational animal. So at least we have been told. Throughout a long life I have searched diligently for evidence in favor of this statement. So far, I have not had the good fortune to come across it. — Bertrand Russell, Philosopher

Given our place in history, this makes sense. If the 20th Century wasn’t enough of an attack on the Enlightenment celebration of human reason, we are entering Round Two of the rise of authoritarian, ‘Strong Man’ attacks on truth and reason. How does this happen? I propose that it is the result, at least in part, of living under a deficient anthropology, an insufficient understanding of who we are as human beings.

Arlie Russell Hochschild’s recent book Strangers in Their Own Land offers Mimetic Theorists a sociological study that can help deepen our anthropological understanding of matters such as the human susceptibility to a Strong Man. A Berkeley sociologist, she spent many months over several years living in Lake Charles, LA, a hotbed of the Tea Party movement. Hochschild begins her book with stories about the people she met, interviewed, and with whom she developed relationships. They exemplify an account of people who seemingly and irrationally support politics that go against their personal interests — the Great Paradox, she calls it.

I was personally moved by the story of Harold and Annette Areno, who still live on the farming homestead of Harold’s parents and nine siblings (Ch. 3, “The Rememberers”). The Arenos bear witness to devastating loss, beginning with the environment of their youth. Annette reminisces,

“I remember sitting under the cypress for shade in the heat of the summer. The moss hanging on it was green then. Frogs could breathe and they could find all kinds of minnows. Then industry came in. It began to stink so bad you had to leave the windows down on hot nights. It killed the cypress and grass from here clear out to the Gulf. And you still can’t eat the fish or drink the water.” (42)

And as if the devastation of one’s home environment isn’t enough, Hochschild recounts:

But there is more. Animals and fish are not all they have lost. I brace myself.

Shifting in his chair and coughing slightly, Harold continues, “My brother-in-law J.D. was the first. He came down with a brain tumor and died at forty-seven. Then my sister next door, Lily May, had breast cancer that went into her bones. My mom died of lung and bladder cancer. And others up the bayou: Edward May and Lambert both died with cancer. Julia and Wendell, live two miles from here, they got it. My sister grew up here but moved over to Houston River and she’s fighting cancer. And my other brother-in-law, he had prostate cancer that went in the bone.” (Both Annette and Harold are cancer survivors.)

“The only one that didn’t get cancer was my daddy,” Harold says, “and he never worked in the plants. Everybody else — all us kids and our spouses that lived on these forty acres — come down with cancer.”

In Harold’s immediate family, all those who got cancer, except for Annette and Harold, died of it. No one in earlier generations — like that of Harold’s grandfather — suffered from or died of cancer. And, as Pentecostals, no one in the family smoked or drank liquor. (43-44)

The Arenos now consider themselves environmentalists, yet here’s the Great Paradox: they continually support Tea Party and other Republican candidates who want to dismantle the Environmental Protection Agency. Why? That’s what Hochschild’s book seeks to understand. It goes deeper in its analysis to cultures and “deep stories” the likes of which most of us cannot fully see, because we are the proverbial ‘fish in water’ (hopefully, not the fish in the bayou waters around Lake Charles). The thing most easily hidden from us is the ‘rationality’ of the cultures in which we are nurtured.

Mimetic Theory poses that the Arenos’ dominant culture is the only kind available to any human being since our advent as a species, namely, a religion-based culture. (Even so-called secular culture is religious via its faith in false transcendences, such as the “myth of the free market”; see my previous blog, “Opposing Faiths: ‘Free Market’ vs. Easter.”) Hochschild’s telling of the Arenos’ story emphasizes their culture as rooted in Pentecostal Christian faith; it is what helped them survive their catastrophic losses of home and loved ones. She writes, “Their faith had guided them through a painful loss of family, friends, neighbors, frogs, turtles, and trees. They felt God had blessed them with this courage to face their ordeals, and they thanked Him for that” (47).

And so when the Arenos choose political candidates to support, faith issues take precedence: “We vote for candidates that put the Bible where it belongs. We try to be right-living, clean-living people, and we’d like our leaders to live that way and believe in that, too” (47). Moreover, as believers in the Rapture, going to heaven is their ultimate consolation. As Harold Areno tells Hochschild, “We’re on this earth for a limited amount of time. But if we get our souls saved, we go to Heaven, and Heaven is for eternity. We’ll never have to worry about the environment from then on. That’s the most important thing. I’m thinking long-term” (54). Yes, our cultures can help us to rationalize quite a lot.

Hochschild’s next move is to go deeper into the enculturation process to what she calls “deep story”:

A deep story is a feels-as-if story — it’s the story feelings tell, in the language of symbols. It removes judgment. It removes fact. It tells us how things feel. Such a story permits those on both sides of the political spectrum to stand back and explore the subjective prism through which the party on the other side sees the world. And I don’t believe we understand anyone’s politics, right or left, without it. For we all have a deep story. (135)

In an endnote to this paragraph (on page 297), she further explains that the process of “deep story” involves the central metaphors each person uses to shape meaning in their lives, citing especially the work of George Lakoff and Mark Johnson in Metaphors We Live By. Hochschild pursues this strategy by first seeking a deep story that arises out of and resonates with the stories she has been listening to.

The basic deep story she hears among the Tea Partyists of Louisiana involves the metaphor of standing in line with everyone else in this competitive consumerist culture. The typical Tea Partyist stands somewhere in the middle of the line, seeking to advance; and the white elitists who are in front of them in the line seem to be trying to help those behind them, especially People of Color, to line-jump in front of them. Hochschild converts this metaphor into a lengthy narrative (pp. 136-45) that she shares with those she has been getting to know. Their basic response is, ‘Yep, that about sums things up’ (145).

Next, she suggests how this basic deep story is adaptable into various kinds of personal stories based on the individual’s personal metaphor for themselves: the Team Player (Ch. 10), the Worshipper (Ch. 11), the Cowboy (Ch. 12), and the Rebel (Ch. 13).

Ultimately, however, these deep stories are rooted in deeper history. For people with long roots in Louisiana, this is basically a history of racism that goes back to the Civil War of the 1860’s and the Civil Rights Movement of the 1960’s (Ch. 14). It is about northern white elites telling you how wrong you are, and then holding a deep resentment toward them.

And so finally into that 150-year history stepped Donald J. Trump, promising that they would no longer feel like strangers in their own land (Ch. 15)….

This entry was posted in Paul Nuechterlein's Blog. Bookmark the permalink.