by Sangeetha Ekambaram. First appeared in the Aug. 2018 Issue of the COV&R Bulletin.    REGISTER NOW FOR THE 2019 CONFERENCE!

The 2018 Theology and Peace conference, ACCEPTING THE INVITATION TO THE BELOVED COMMUNITY took place at American Baptist College in Nashville, TN. ABC has served as the training ground for several prominent leaders from the Civil Rights movement until today. Each aspect of the conference centered on Rev. Dr. Martin Luther King Jr.’s vision of the “Beloved Community.” 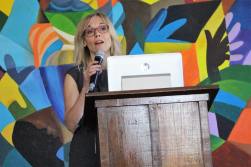 Susan Wright, outgoing Theology and Peace president, opened the conference by invoking King’s awareness of the human need for community and engagement with the adversary in order to achieve this goal. Wright referred to René Girard’s concept of the pre-rational tendency to imitate each other’s desires as evidence of this need. [Watch on YouTube]

That evening’s film, King in the Wilderness, brought to attention King’s emphasis on economic justice as the true foundation of building the “beloved community.” The conference was graced throughout by community-building practices such as group singing, led by Patty Prasada-Rao and Elder C.W. Harris, contemplative meditation, and prayers. 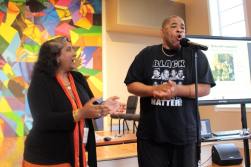 Throughout the conference Patty Prasad-Rao and Elder CW Harris led us in prayer and song. 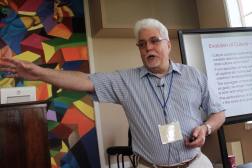 The first morning engaged participants with the works of René Girard. James Warren oriented a group of newcomers by laying out the basics of mimetic theory. An advanced group featured Paul Neuchterlein, who reviewed the evolution of Girard’s theories, including the idea that the self-sacrificial victim in the Christian tradition uniquely addresses the basic issue of violence. He brought to attention the racial and gendered foundations of systemic violence through the lens of various academic disciplines and the need for personal self-awareness.

ABC faculty, Phyllis Hildreth, J.D. and Joseph Tribble, M. Div., responded. Primarily concerned with how mimetic theory intersects with beloved community, Hildreth aimed to contextualize Girard’s theories and the conversations surrounding them. She asked critical questions about who was included in the conversation and who was being centered. In conversations aimed at reconciliation, she cautioned that it is crucial to remember that, depending on one’s position in the power structures that be, not all approach the table in the same way. Tribble questioned Girard’s basic notions about mimetic desire within the framework of cultural, social, and psychological complexity. He cautioned against the tendency to oversimplify “into large categories.” Echoing Hildreth, Tribble argued that true engagement occurs when the dominant group is decentered.

He argued that it is exactly American society’s refusal to accept the “Beloved Community” in the form of economic justice, that “allowed the worst demons of racism to re-enter the house,” and in even more insidious forms than in the 1960s. Harris fervently argued that it is those at the margins of society that hold the key to true liberation for all, as their experiences stand in stark testimony against the “pharaohs of our time.” He used the metaphor of a stitching the garment of “life to love…and love to liberation” as the “singular calling of our collective humanity.”

Rev. Mary McKinney and Rahim Buford followed with response. [Watch on YouTube]. Rev. McKinney traced her journey from growing up in a segregated Georgia to choosing a seminary in Chicago that could situate her perspective on race in America. She also discussed her identity as a queer woman, struggling with the conservative teachings of her religious upbringing. 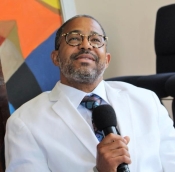 Rahim Buford advocates on behalf of and mentors those held in a local juvenile detention center.

Rahim Buford, a student at American Baptist College, was formerly incarcerated for 25 years after being tried and convicted as a juvenile. He shared much about his life story, a testament to a harsh and unjust criminal justice system, especially towards juveniles. After a difficult and long process, he was eventually released. In addition to sharing his story, he advocates on behalf of and mentors those held in a local juvenile detention center. 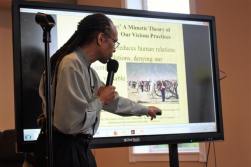 The plenary speaker that evening, Dr. Thee Smith from Emory University, addressed issues of restorative practices as a response to the human tendency towards “target practice.” [Watch on YouTube] He showed how the Christian practice of the Eucharist can address the issue of violence as it can act as a “substitution for the sacrificial victim.”

Thee then pointed to various practices of reconciliation and invited the conference attendees to participate in an exercise “rehearsal for the beloved community.”

Wednesday morning began with a powerful prayer session for the clemency hearing of Cyntoia Brown taking place that morning. Incoming Theology and Peace president Preston Shipp would be speaking in her defense.

Rev. Jeannie Alexander, director of No Exceptions Prison Collective, shared the experiences of the scapegoated.

Rev. Jeannie Alexander, Director of No Excpetions Prison Collective, then led the bible study focusing on Mark 5:1-20, reading through the interpretive lens of mass incarceration. She vehemently argued that Girard’s notion that modern day religion no longer enacts violent ritualism is plainly false. She offered the testimony of her own experience as a prison chaplain, and the ritualization of state violence in the rehearsal and performance of state executions. She further pointed out that we, as a society, scapegoat criminals, instead of dealing with systemic issues of racism and poverty. [Watch Part 1] [Watch Part 2 ]

That afternoon conference attendees visited Thistle Farms, founded by Becca Stevens. The business assists women in escaping life on the streets or other dangerous situations and supports them in their “journey to wholeness.” Stevens asserted, however, that wholeness is not enough if poverty remains an issue.

Therefore, Thistle Farms also offers employment to these women through its bath and body care company. The business includes global partnerships, sharing its vision of economic justice to women in particularly Rwanda and in a Syrian refugee camp in Greece. 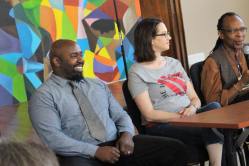 The con-ference concluded with reflections on Girardian theory in the context of today’s realities. As participants reflected on the “Beloved Community,” Dr. Thee Smith reminded us that Dr. King was a sacrificial victim of American society, not only in his murder, but in the present day with the domestication of his radical vision.

Theology & Peace will return to American Baptist College, June 17-20, 2019 for our 12th Annual Conference: “Beloved Community as the Way from Scapegoating to Ubuntu.”

REGISTER NOW FOR THE 2019 CONFERENCE!

I use Rene Girard's mimetic theory to read comics. It's amazing what comes to light. Comics are far richer than I ever realized.
View all posts by Sue Wright →
This entry was posted in Theology & Peace Conference. Bookmark the permalink.